It was over one year ago that I first set my heart on having my own Dollfie Dream. I’d long admired Dollfie Dreams, but firmly believed that due to their astronomical price tags, they were far from my reach. However I soon learned that it was possible to make customs by assembling the parts yourself, and doing so was notably more affordable. I still remember the feeling of excitement when in response to a question I asked on figure.fm about hair styling for Tamaki, somebody linked Volks’ store which listed the separate Dollfie Dream parts for sale. I really had no idea that building your own doll was so easy!

After solidifying my decision, I made it the blog equivalent of “Facebook Official” by announcing my project here! Titled “Project DD”, my unintentionally long journey began. The first post titled “The Start” described my intentions for the project and adventure as a budding doll enthusiast. This post was made on March 25th, 2013. I fully intended for the project to last four or five months at most. It would surely be finished by the end of the year.

Next came the head, eyes, and wig. And by that point, it was obvious that my five month project would last much longer. After that was the body and a small set back before my girl was ready for what is arguably the most identifiable part of a doll: the face up.

It seems that the stars were aligned at the time I decided to start my project because it was not just learning that doll parts could be purchased separately that led to my decision, but learning that face ups can be commissioned from various artists. And it was when my delicate usagi heart was faltering that a new face up shop opened: Dollfieville. Dollfieville is a face up service run by Bellatrix who is located in Italy. I loved her work, and seeing that this shop was part of what helped me to make my Dollfie Dream decision, I decided it was more than appropriate to have my doll’s face painted there!

Funny thing is that were it not for my dog, I’d have missed the package. I was cleaning the shower like the good child I am and listening to Kalafina with my earbuds in…like the good child I am when suddenly I heard barking. Rushing out from the bathroom, I saw the mailman(or mail lady in my case) sliding the pink slip into the door. Knowing that it could only be my Dollfie Dream head, I rushed to open the door not giving mind to my unbrushed hair and over sized Dialga tee shirt. Because some things are more important.

Inside the box was a box.

My little head has come all the way from Italy. This head has been to more places than I have. 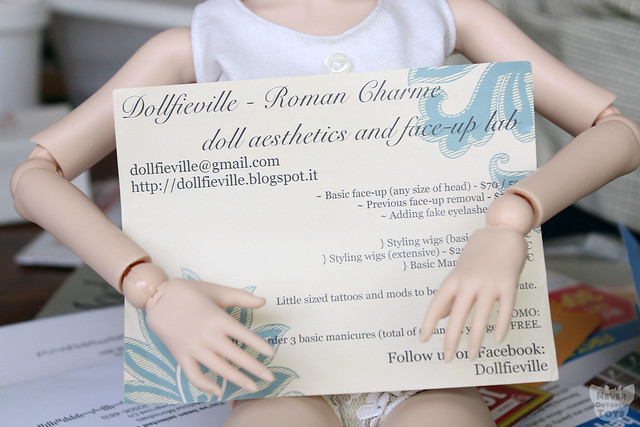 Inside was also some Dollfieville info! You can see the offered services and prices! 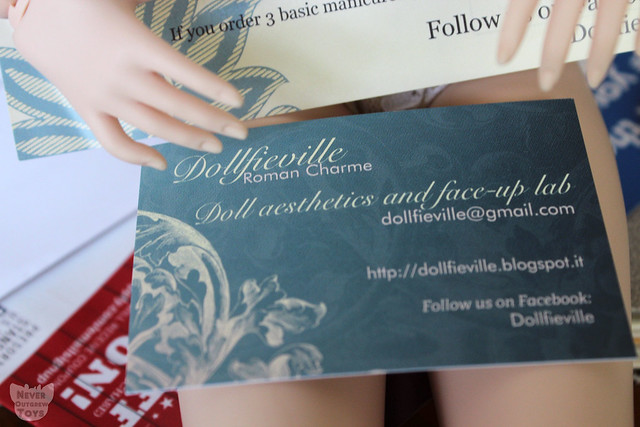 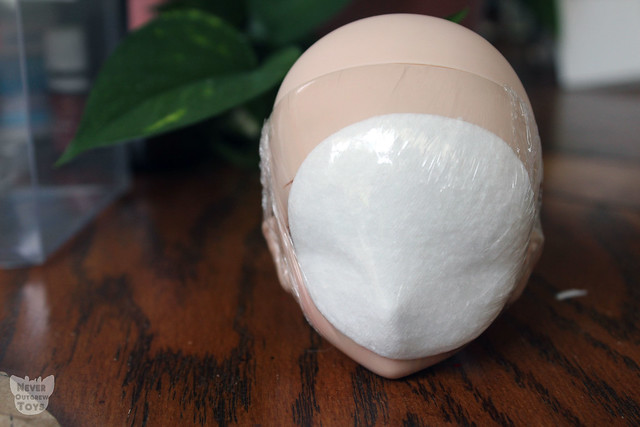 The face up was well protected with a cotton pad and plastic.

Now for the moment of truth! 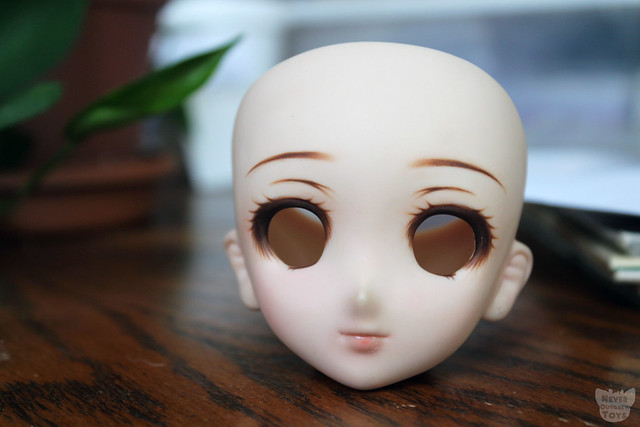 After choosing the 06 head, I spent a lot of time searching face ups that had a feel similar to what I wanted since as I’ve mentioned my doll is based on my own character, and although I know her personality, I was having difficulty envisioning her face.
When the time came for painting, I sent a description of her character along with several reference images. I also asked that the colors be complimentary of her red wig.
When the face up was finished, I was nervous to finally see it since it was something I’d been thinking about for a long time, but once I saw it, I slowly and surely fell in love. One thing I like is that the face isn’t just what I imagined and is totally unique.

The face up is lovely, but this girl needs to be able to see! 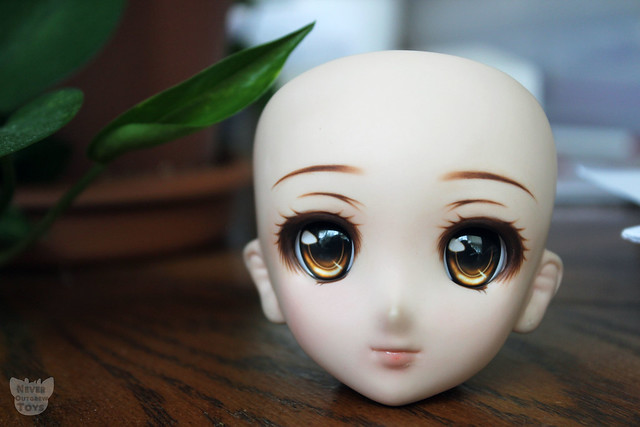 She looks more lively now.
As a reminder, the eyes are Twin Snow Stardust 005. I am now extremely happy to have purchased the eyes when I did because Twin Snow mysteriously disappeared shortly after. A shame because their eyes have a lot of pop.

Now enough playing around! Let’s give that head a wig and body to officially introduce… 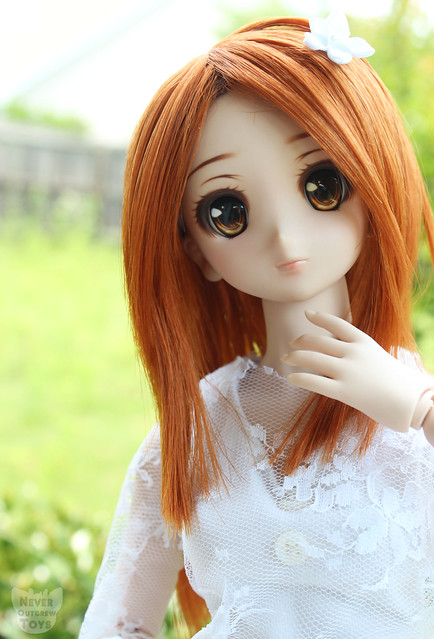 Celeste! My very first Dollfie Dream!
One important thing about Celeste is that she loves nice clothing! Her style is high end, but not showy and mostly consists of light fabrics in pastels and creams. This of course presents a challenge since I want to make all of her clothing myself, but having different wardrobes for everyone is part of the fun.
Come to think of it, Kagura is my only doll who will wear anything. 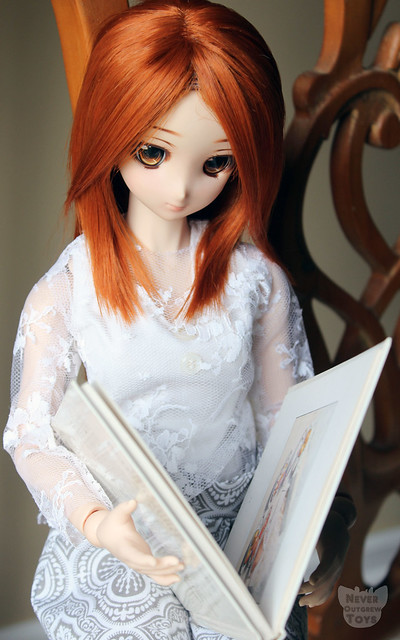 Another thing she likes is reading. It’s a great way to help you get to sleep. Unless you’re me, and use your laptop, and it’s anime.

Celeste’s wig also went through a transformation. You may recall that it arrived with very long straight bangs. I figured the bangs would stay the way they were until I put the wig on Celeste to brush it out. The bangs then practically shaped themselves! I ended up with a very angular style, almost like something you’d see on a figure.
I first styled the hair with my beloved Azone wax(seriously, I use that stuff on everything with hair), then set the style with boiling water. The wig still needs a bit of wax to help it stay in place, but I am very happy with it! I also cut the wig to her mid back since it originally reached far below her waist. 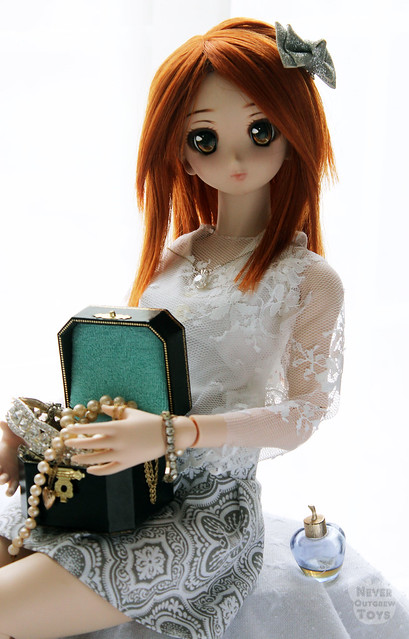 This first outfit shows Celeste more dolled up(haha) and consists of a lace top, white undershirt, geometric skirt, and Volks black heels. The heels are my only shoes for her right now, so I wanted to put her in at least one outfit where she is not barefoot. The funny thing is that all of my photos showing the shoes ended up not making the cut.
Seeing that this is a formal look, I quickly realized that an outdoor setting would not be suitable. My solution was to move inside and take advantage of some of my favorite back lighting. All of my current props are 1/12 or 1/6 scale, so I found some mini jewelry boxes and gathered lots of shiny things. 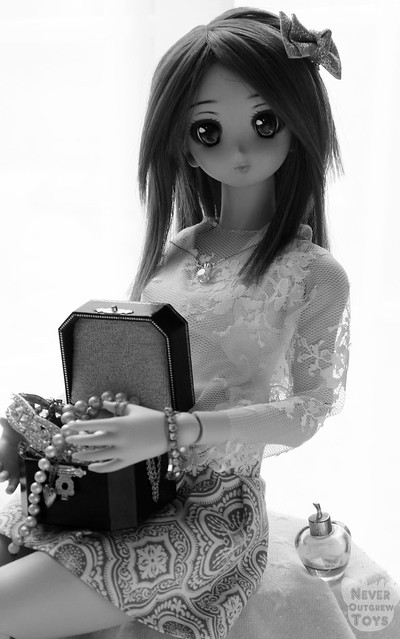 Also in black and white! Which do you prefer? 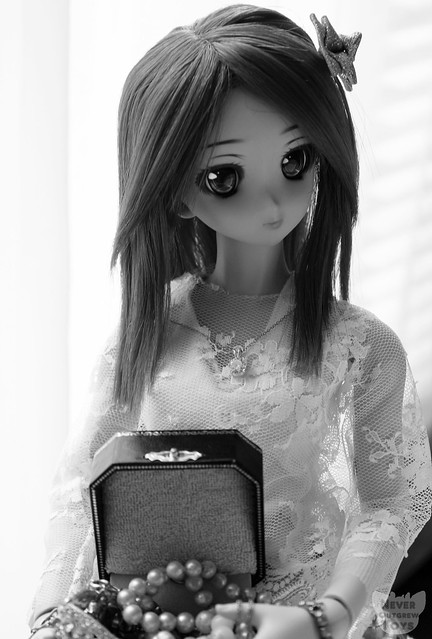 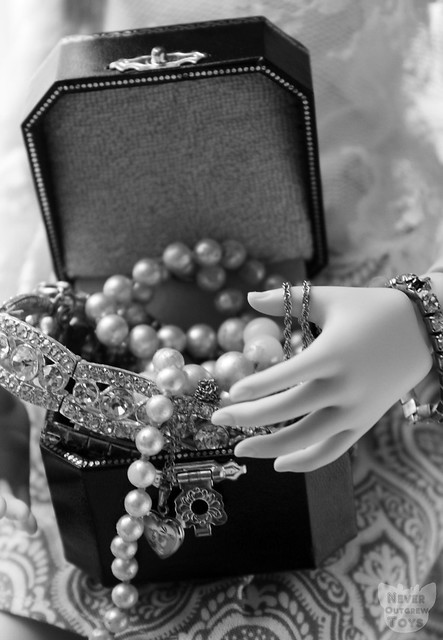 A close up of the box. 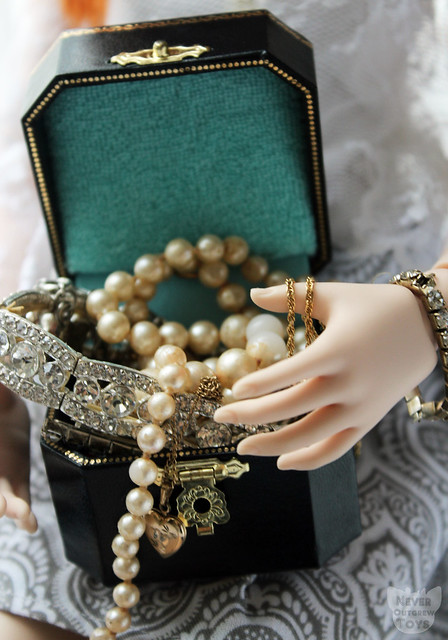 After this, it was time for a costume change! I’ve been sewing a lot in anticipation of Celeste’s completion, and she has a decent wardrobe now. This next dress is a hi low one which I made for the summer! 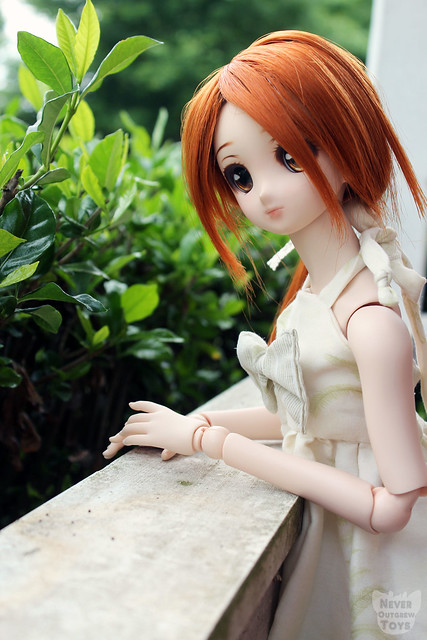 The fabric is from an old comforter that my mom was going to get rid of. It has palm trees on it! 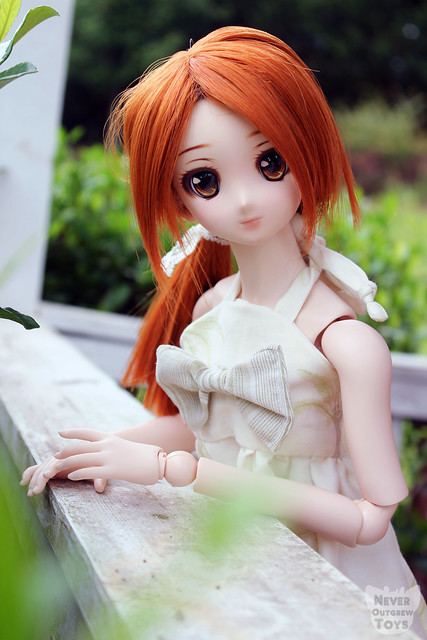 “Southern Summers”
Probably my favorite from this shoot! 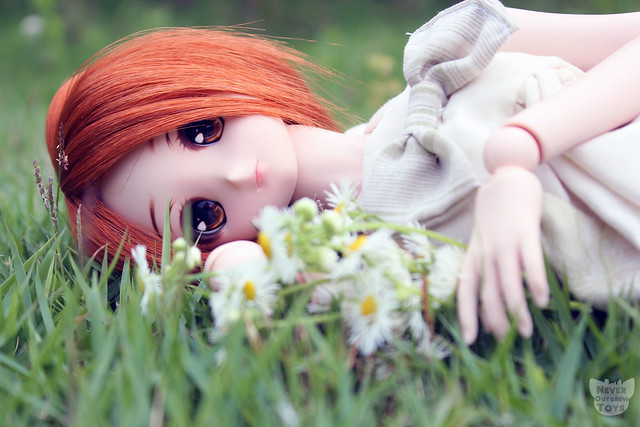 I found some short grass perfect for Dollfies!

The final costume change was a quick casual one featuring the shirt I bought from Murasaki.me 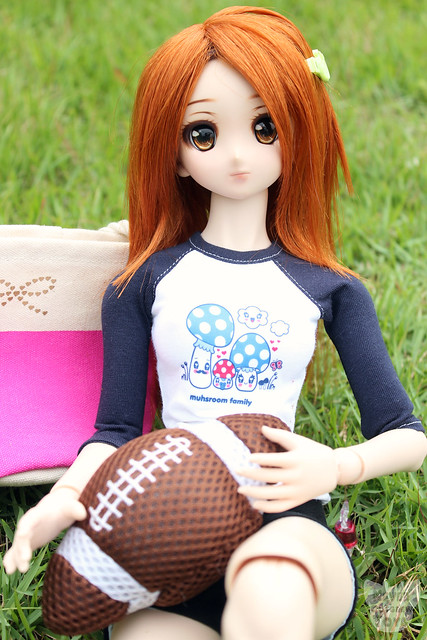 I knew that tiny football would come in handy one of these days. I tried posing her standing in the grass with the ball, but I think anyone who owns a Dollfie will know how impossible that is. Besides, I never liked sports anyway.

That finally brings this project to a close. It’s been a long journey, and I thank you all for following it with me, and part of what made finally completing the project fun was being able to share it. This is far from the last you’ll see of Celeste. In fact, I somehow neglected to take a family photo of her with the Pureneemos, and let’s not forget the inevitable introduction photo story. Just how will Celeste meet Tamaki and Kagura? And will they become easy friends? We’ll find out soon!