Uhuhuhu I have returned to dump some photos!

But let’s have a little life update! After a full year of trying business, I switched my college major back into art. Art still makes me unsure sometimes, but frankly, I was miserable in business. I still think that I would have done well could I have gotten to the creative type classes, but business was very frustrating because no matter how hard I tried, I couldn’t do well, and perhaps more importantly, I couldn’t make myself care about anything. I have at least always been a good student, but this past year was just…bad. Failing an intermediate accounting midterm threw me off the edge, and I decided to essentially go crawling back to the art department. It was a hard decision to face because I had told myself for so long that leaving art was the right thing to do. But as soon as I resigned myself to returning to art…I felt better. A LOT BETTER. Better than I had felt in a long long time. Focusing on business classes meant I had to give up a lot of things I usually did(like this blog) which is fine and understandable, but I soon came to realize that practicing creative things is more a part of me than I had realized. Through that year, I never stopped looking at and admiring art because that’s what I’ve always done, but it started to make me very sad. I still wanted artistic fulfillment, but had resigned myself to not having it. Now, I’m not saying that choosing one thing means you can’t have the other or that people of one mind can’t be of another. But for me PERSONALLY, it was not a good thing.

SO I have returned to the creative side of things, and now that I see it is more important to me than I had realized, I am taking it more seriously! Previously, I didn’t think of myself as an artist because I am not good at drawing and painting. And while that still frustrates me, I’ve begun to immerse myself in the kind of art I am good at! This includes crafting which my passion for was reignited through cosplay. I’ve also begun doing things like making felt dolls and paper art. It’s been very fun and fulfilling! Figures have taken a back seat for a long time because I have not been financially able to support this hobby. I do miss it though, and I now have the incentive to give it more attention, so I’m not making any promises about coming back to this blog in full force, but just wanted to talk about what’s changed with me. And thank you to anyone who has stuck around after a year of intermittent silence.

Also, I am much more active on other sites! My Instagram tipsy_scales is for all of my crafts and photos and such. I’m also on twitter as Tipsy_Scales which still has updates on what I make, but also a fair bit of retweeting fan art. My tumblr Yam1Usag1 updates my figure photos only and is about as active as this blog.

Ahaha now that that’s all out of the way, let’s move on to the photos! 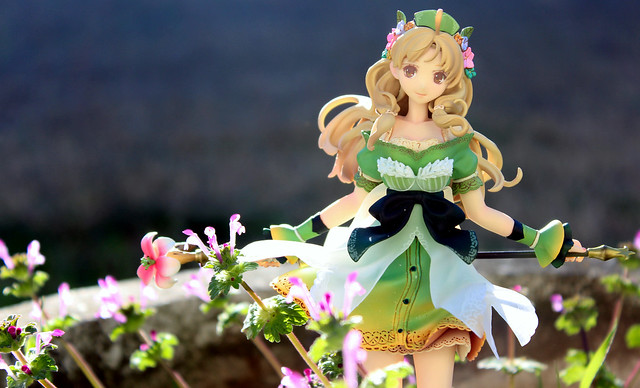 END_OF_DOCUMENT_TOKEN_TO_BE_REPLACED

Yo yo yo! I’m here for my unintentional monthly update!

Bizarre weather led to spring in mid February. Flowers on our plum tree sprouted, so I used the opportunity to snap some pictures of my new Yamatonokami Yasusada figure! 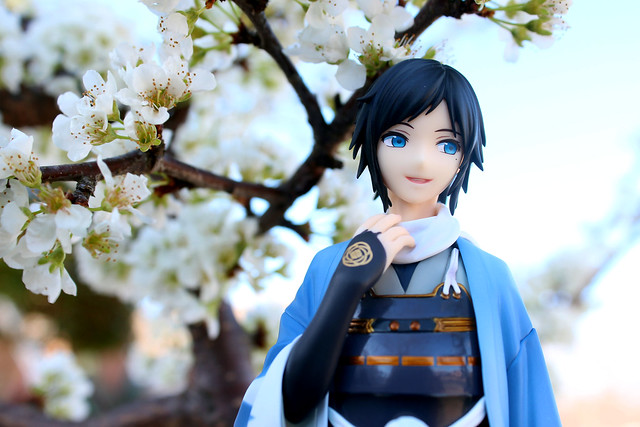 Yasu is my favorite Touken Ranbu sword, and this figure of him, while simple, is just perfect!

END_OF_DOCUMENT_TOKEN_TO_BE_REPLACED

Hello! I’m back for what is apparently my monthly blog post. Today was unseasonably warm, so I decided to snap a few photos of nendoroid Elise who I got last week!

All of the photos from this set that I kept ended up using the same expression, so I’ve titled this set “Elise’s Smile”. 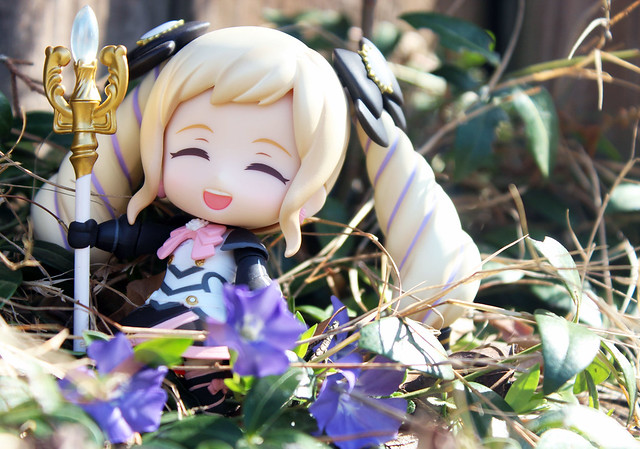 This cutie is one of the little sisters from Fire Emblem Fates! She’s a healer, so she comes with a cute little staff.

END_OF_DOCUMENT_TOKEN_TO_BE_REPLACED

It snowed this weekend, so I took a few shots of figures who I thought would look nice in the semi frosty(I didn’t get out until a good bit had melted) wonderland. 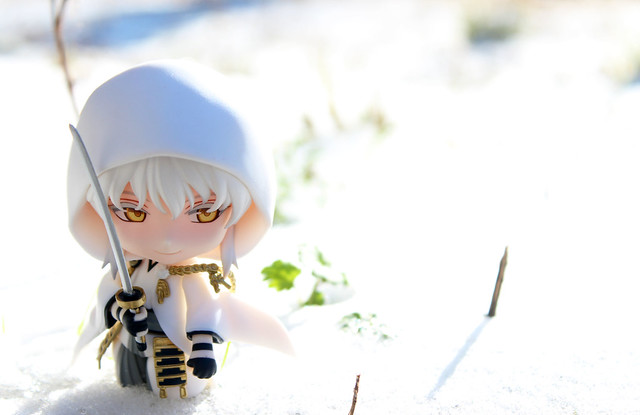 I keep photographing Tsurumaru in front of white things, but it’s good contrast, so JUST TRY TO STOP ME.

END_OF_DOCUMENT_TOKEN_TO_BE_REPLACED

Howdy howdy! Today I felt like taking a few photos. I needed someone who would look good outside, and wanted to use a newer figure, so I went with Kirito and Asuna. I ended up with mostly shots of Kirito, but hey! 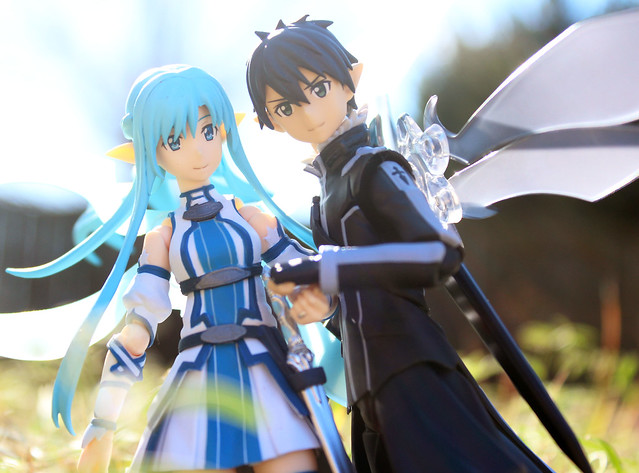 END_OF_DOCUMENT_TOKEN_TO_BE_REPLACED

Howdy! I hope everyone is doing well~
It was surprisingly warm today, so I thought it a good opportunity to play with one of my newest figures: Caster!

I’ve wanted a Caster figma for years, so finally having one is a dream come true! I plan to get the nendo as well when I can.

I take most of my pictures outdoors, so winter is always a dry spell since there’s not much interesting out(snow comes not until January and February–if at all). However, the colorless grass and bright sun do make for an interesting backdrop which worked just fine for Caster. Winter light also has a uniquely pure brightness to it.

Caster is on my list of top favorite characters, so I hope I made her shine!

The figma very pretty, but her elbows are a pain to pose. Her arms are also very limited which is a shame since she’s a mage who performs magic mostly by moving…

END_OF_DOCUMENT_TOKEN_TO_BE_REPLACED

I was all excited to have pictures for a new post, but looks like my last post was about Cordelia too ahaha. I really like Cordelia though–not as a perfect figures, but a memorable and impressive one, and that is why whenever I have the chance to get some neat photos, I go for her. Today was one of those days! One of the seasonal “events” I can rely on is a cloudy day and bright red maple leaves. Not many leaves have fallen from the tree yet, but I still used what little day light was remaining when I got home for some photos. 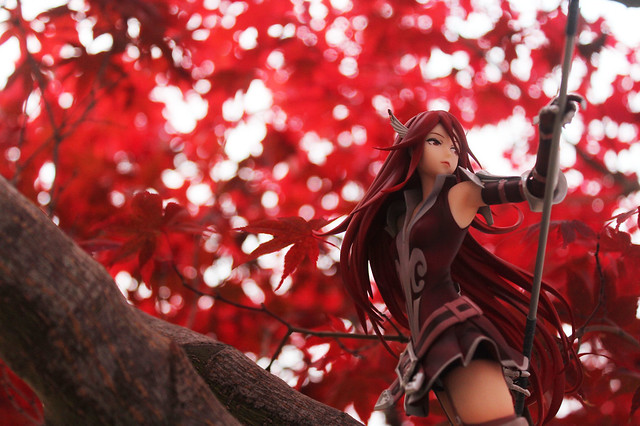 END_OF_DOCUMENT_TOKEN_TO_BE_REPLACED

Cordelia is another figure I got months ago, photographed, and have not mentioned since. I’m rather indifferent towards Cordelia as a character, but I’m a huge fan of Fire Emblem Awakening, and how Tharja’s figure looked, so I went ahead and got her. I have some photos for a proper review, but in the mean time here are some portrait shots. I did full body ones, but ended up not liking any of them.

Ok, a lot of these are technically landscapes, but what I mean is they’re upper body shots. Idk I just didn’t want “Cordelia Body Shots” as a post title.

END_OF_DOCUMENT_TOKEN_TO_BE_REPLACED

Please check the bottom of the post for the first of many figures I’m selling!

Now back to our scheduled programming

Considering how much I like Touken Ranbu and that I have 8 nendoroids from it, I’ve posted woefully little about it. And I’m going to continue doing just that for the foreseeable future. Still, a few months back when I got Ichigo Hitofuri, I snapped some pictures of him with some flowers. I also took the photos for a review which I will hopefully write some time before I die.

And by the way, for those who don’t follow my Facebook page, I’m on Instagram now! I intended for it to be a private-ish personal account, but in all honesty I never go anywhere ever, so it’s mostly pictures of figures with cosplay progress on the weekends. My name is tipsy_scales

Ok, back to flowers. 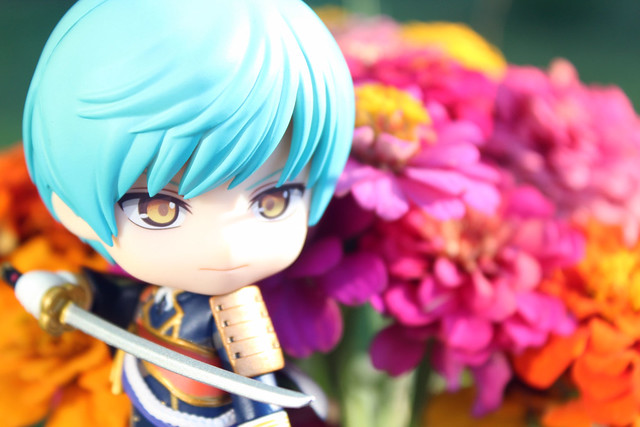 END_OF_DOCUMENT_TOKEN_TO_BE_REPLACED

I found some Momohime pictures languishing in a folder on my computer, so let’s…let’s look at them!

Momohime has always been a treasure figure in my collection, yet I’ve never dedicated much time to posting about her. What I can confirm is that she looks good everywhere and all the time. It’s scary that a figure can be this photogenic! 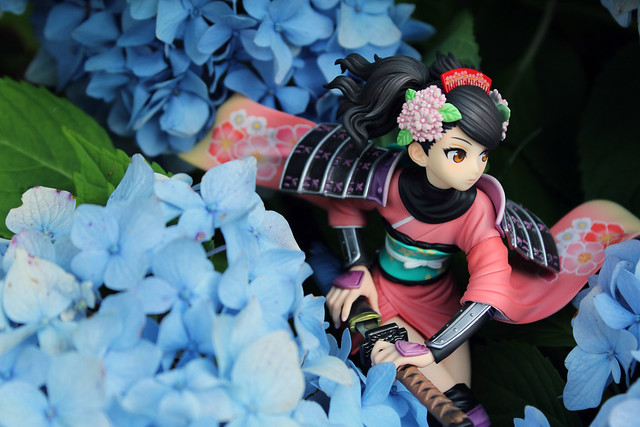 END_OF_DOCUMENT_TOKEN_TO_BE_REPLACED

My Tweets
Join 170 other followers